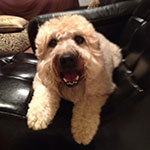 Saying goodbye to my dog Bear

So many friends have reached out to me after hearing the news about the passing of our dog, Bear. I have decided to write this blog post to share with you some of the special memories that we have shared with him. Let me first say that Bear’s last day here with us was very happy . We had consulted with three veterinarians when we found out that Bear had Hemangiosarcoma. The last vet, would be the one that would help us guide Bear through his passing and help us make the decision as to when his time had come. He shared something with me that was particularly helpful. He said that dogs don’t judge their time on this planet by the amount of years or days that they are here. He felt that we look at time and age in regards to our pets and they only look at their life day by day. So happy day equals happy dog. My dilemma with Bear this past week after he endured another bleed was some moments of his day were happy and some were very sad:( I decided it was important for me to be there for him just as he was there for me all those years. On his last day I gave him some valium and the anxiety that he was feeling from being weak went away ! It was great to see him relieved and then I knew that he was emotional suffering too. He got in such a good mood he was able to eat three ice creams. I love this memory. The vet came to our home and made things as pleasant as possible for both Bear and for us.
So why did Bear touch everyone he came in contact with? Well, he felt that his job here on Earth was to “connect” with humans and give them hugs and love. From the moment he met you he wanted to hug you and stare into your eyes and fall in love. It didn’t matter who you were or where he met you. If a repair person knocked on the door he wanted to love him. If you walked by him when he was out , he wanted to love and hug you. I can remember sometimes we would have to say “Bear” Down” !! We tried to get his trainer, Barbara Ann to stop him from jumping up to hug everyone but Bear wouldn’t budge. He loved everyone, all the time, from the moment he met you. Bear used to like to break through the invisible fence out back and go running in the neighborhood. Every time a neighbor would get him, neighbors we didn’t know, they would say “Bear is a really great dog, he can stay here for awhile no rush to pick him up.” One time he went to a bus stop full of children and was loving all of the children there. Hugs and more hugs. The bus pulled up and Bear got on with them !:) I’ll never forget when one of the mom’s from the bus stop walked him home to us. Only one time was I frightened when he ran away. The police picked him up and he was at the station hugging everyone there. He didn’t kiss you all over just one or two kisses and then hugs.
My kids told me a funny story about one of their favorite memories of Bear. One night when they were very young he snuck upstairs into their bedroom in the middle of the night. He had always slept on the lower level. They all were so excited that he snuck up there that they stayed up ALL night and played together. I still can remember getting up to wake them for school and it looked like a dance party had taken place during the night in their room.
One of Bear’s favorite things to do was to go bye bye in the car. You just had to say the word and he was happy and running to the door. I took him for a ride every day this past week. It is a memory that I will treasure. On Sunday he was not feeling well at all but as I was driving around the block I could tell he wanted to stay in the car longer. So I ran into the Hallmark store and just as he always did , he would hop into the drivers seat and watch me until I came back. When I got in the car he started sniffing in the bag as if to say “what did you get me?” I felt so badly since he wasn’t showing any interest in food at all. I never thought he would want anything. I quickly drove to a Rite Aid and bought a bag of pup peroni sticks for him. I came back out and opened up the bag and gave him one. It was so nice to see him wanting to eat:)
I wanted to thank everyone for their support and love during this time in our lives. It has really brought the lesson right back home that I had learned after losing my father almost two years ago. That life is a precious gift that is meant to be enjoyed , every day, every moment.

Lessons I learned from my dog, Bear

We found out this past Monday that my dog has Hemangiosarcoma. Hemangiosarcoma is a very aggressive, high-grade soft tissue sarcoma with the most common areas affected being the spleen and heart. A highly malignant cancer which preys on blood vessels, it can spread rapidly, causing tumors almost anywhere in the body. Hemangiosarcoma is insidious, as it attempts to build it’s own blood vessel network, making blood blister like formations which disrupts normal organ function. It is commonly in the advanced stage before detection, making it virtually a silent killer. Thank goodness it wasn’t so silent. We brought him up last Monday to the vet since he was acting a bit off. Luckily we did since he was hemorrhaging internally. He needed an emergency splenectomy. Bear has survived the surgery and he is doing well. We have him on 8 different supplements to keep the cancer from aggressively growing as well as a homeopathic regime.
At this point we have opted not to do chemotherapy. It can’t cure the cancer , and we don’t want to put him through it at this time.
Amazingly so, this experience hasn’t made me angry or upset with God and the Universe. I actually feel so much more love in my heart for everyone and everything. Bear was the dog that comforted me through my divorce. When I cried, he would lie by my side. He learned how to hug and jumps up on those he loves (and even strangers) to give them a big hug. It is now my time time comfort him. When we found out Bear’s diagnosis my husband said “Bear is dying” I turned to him and said “We all are dying” Life is in fact a terminal illness… If we were able to live our lives every day knowing what a precious gift every day, every minute was then we would be living our fullest. Bear’s recent crisis has brought this to my attention once again. I thank Bear for this valuable lesson. Love you Bear:) Keep on keeping on….